No, you didn't do anything wrong. Git sometimes is like your best friend who secretly hates you. Let's say you start a fresh new project:

So far so good. But - if like any self respecting geek, you juggle a million git repositories on your machine - you will soon have forgotten whether you started or cloned this particular repository. If you are unlucky that means you will run into this:

Not helpful. "git pull" seems to try to make up for it by giving you way too much information:

Ok, so what exactly do I have to do to fix this? Right, you ignore all those blobs in your repository making fun of you, and type:

Using git and feeling like one has a certain overlap in the beginning. On your way to git enlightenment, or to the madhouse, you may eventually discover the fix:

And no, do not, not even for a second, assume you could skip "branch.master.remote". Git remote will be very clear about how much it hates you if you do:

What in the name of the kernel? Git clearly knows the remote you are talking about, its merely teasing you, possibly corrupting your repo by turning some blobs into LOLcats. For added frustration, here is my output for "git push":

This is probably unique to my install. In case git does not hate you equally, you can try to complain about it in #git. That of course will only result in people telling you that you are being unreasonable. To a kernel hacker, the idea of git remote making some smart assumptions when adding the first remote to your fresh repository that only has a single branch, that is like talking healthcare reform with a right-wing hardliner.

Disclaimer: I love git, but some parts of it seem to purely back up the name. But relax. I'll save talking about git modules, tracking empty folders and checking out partial trees for another time ...

I'm currently implementing /video/thumbnail functionality for transload.it and did some research on how to implement it.

First I set out to create a single thumbnail which was very easy:

So far so good. But we actually want to offer the ability to take multiple thumbnails (like 8) in 1/8th increments of the video playtime. My initial idea was that there had to be more efficient way then calling up ffmpeg 8 times, and indeed I found one:

This command works the same as the one above, except that it tries to set the frame rate to 1/10 (-r 1/10 = 1 frame every 10 seconds) and saves the results as thumb_000.jpg, thumb_001.jpg, thumb_002.jpg etc. Unfortunately I could not get it to produce the exact results I wanted. I would always end up with the first frame being captured twice, and the frame rate I set would be off by 2-3 seconds.

So I hopped to IRC and asked #ffmpeg for help. Dark_Shikari (one of the crazy people who build the best video codec in the world) was kind enough to help me.

It turns out that the offset parameter (-ss) needs to be set before the input parameter (-i). That will cause ffmpeg to seek to that position in the stream *without* decoding it and in fact skipping anything but key frames! This is pretty significant as performance improved from ~20 seconds for 4 thumbnails to about 2-3 seconds.

So my final setup is pretty much like this. First I find out the video duration by running:

This gives me all kinds of useful information including the length of the video:

I then divide the length by the amount of thumbnails I need, and run a loop like this:

Where $i is the number of the thumb I'm extracting and $interval is the duration of the video divided by the amount of thumbs.

Apple fanboy? Caught in the distortion field? No problem, there is a cure:

As you can see, I have not always been a Mac user. In fact I passionately hated anything Mac after my first contact with an iMac (OS 10.3). I did this video in 2005 while I was a foreign exchange student in Atlanta. My friend in the video is still using PCs - don't flash you fancy macbook next to him in a coffee shop!

Why I have held back posting this for so long? I just integrated transload.it into debuggable.com and needed a video to test. More gems like this are on their way : ).

I kid you not, this is an issue I actually ran into a long time ago and have been terribly careful of avoiding ever since.

It must have been a fantastic day in the "Bad Parts" JavaScript department. While one team was busy screwing up the + operator to be responsible for both string concatenation and addition, another team set out to build a nasty trap inside the parseInt() function.

This together results in probably my favourite JavaScript bug of all times. It goes like this: You have two strings that contain zero padded numbers (like hours or minutes) and you want to perform some math on them:

Of course you would not write such code, but maybe you have a friend who has done it. This friend probably quickly realized that '0708' was not the result he was hoping for, so he got clever and updated his code to:

However, it turns out that the result of this operation is actually 7. SEVEN you ask? Yes: it's not a bug, it's a feature.

JavaScript assumes that any 0-prefixed string ought to be referring to an octal number. This will not become apparent until your string represents an invalid octal such as '08'. So in order to outsmart this "feature" you have to explicitly provide the base for your integer:

I hope this will one day safe somebody the hour of my life that went into this : ).

PS: Got a great JavaScript bug like this as well? I'd be happy to hear about it in the comments. 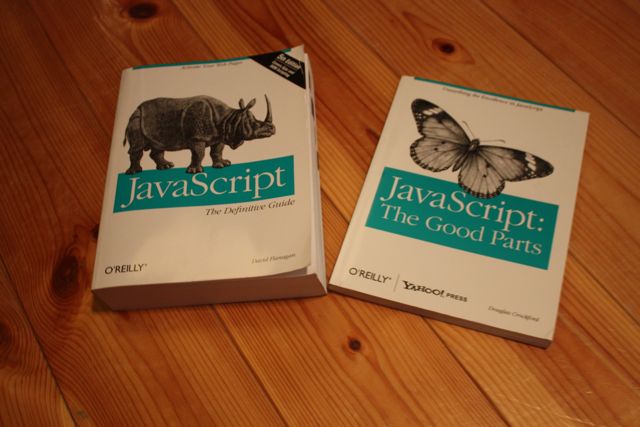 JavaScript is awesome when you stick to the good parts. But sometimes you have to touch it's bad parts. Consider this:

"TypeError: arguments. unshift is not a function"! How dare you JavaScript?

Lucky for us, the good parts of JavaScript come to rescue, namely prototypical inheritance:

Yes, this is the kind of code you might want to document for the poor kids who will have to debug grandpa's "AJAX museum" one day.

Got a better solution? Let me know!

We are on air since 2006. Take a tour through the blog archive.

Maybe you can write so ..

This is very nice plug ..

Thanks didn't quite un ..

Well you could expose ..

Keep an eye on